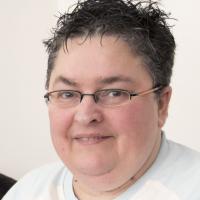 Michele Beggs, from Ballyclare, shares her experience of lung cancer.

Michele was 46 years of age when she began to experience symptoms she was concerned about. At the time, the mother of two ran her own taxi business in Ballyclare.

Michele says: “In June 2012, I had been having a cough, generally feeling unwell and I thought it was another chest infection. My mother had been encouraging me to go and see the doctor. Then the pain in my shoulder became so bad and I knew I had to go to the GP.

“At the time, I knew in myself, that there was something not right. I think you know your own body.”

She says, as a former smoker, she also had an awareness of the symptoms linked to lung cancer which was important.

After going to see her GP, Michele was referred immediately to hospital for tests and was diagnosed with lung cancer in July 2012. She says that early diagnosis was crucial and she had surgery soon after to remove a lung.

“Following surgery I had a very tough year, I was told that there may be recurring chest infections and I was in hospital a number of times.”

Michele says her diagnosis and treatment followed the death of her 15-year-old son Josh in 2007 - a devastating period. She says getting professional support to help her during the last few extremely difficult years has been crucial.

Outcomes after surgery and treatment can be different for each individual. Michele no longer works and although now not playing herself, she is a keen golf fan and a follower of the progress of the top Northern Ireland players.

“It can be difficult with my breathing if I am out and about and I use oxygen to help. But I am alive and that is the most important thing.”

Michele says the early diagnosis was crucial to her successful treatment and she would urge anyone to go to their GP if they have signs and symptoms they are worried about.