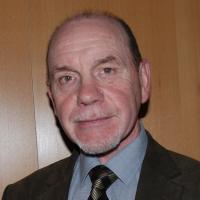 Alexander McGuiggan, from Bangor, shares his experience of cancer of the larynx.

I first noticed something was wrong at Christmas 1998. My voice became hoarse and then deteriorated to a whisper.

I didn’t go and see my GP until March 1999 and, following his referral, I had my first biopsy which came back negative. I then had a course of speech and language therapy, but after approximately six months there was no apparent improvement, so I had a second biopsy which came back positive. It was later confirmed after a visit to see the surgeon that I had laryngeal (voice box) cancer and it was very aggressive.

I would urge anyone who is experiencing something that is unusual for them, don’t wait like I did, go and see your GP early.

I had a laryngectomy in September 1999 followed by 33 sessions of radiotherapy. The laryngectomy involved them removing my voice box completely, so I had to learn to speak again using a voice prosthesis.

I am fine now and luckily it has not detrimentally affected my life to any great extent. In hindsight, I guess I should not have waited three months before seeing my GP, but I felt fine it was just my voice that was slowly disappearing.

I am 64 and a semi-retired Open University lecturer in maths and IT. I enjoy reading, golf and light exercise. So despite losing my voice box as a result of the cancer, I haven’t let it affect my lifestyle too much. And as a result of the laryngectomy I am now involved in voluntary work raising awareness of the needs of laryngectomees with health professionals, which is very rewarding.

I have since found out that cancer of the larynx is one of the rarer cancers, but is more common in men than in women and more commonly found in older people. One of the most frequently recognised symptoms is hoarseness that lasts for more than three weeks. With this in mind I would urge anyone who is experiencing something that is unusual for them, don’t wait like I did, go and see your GP early.