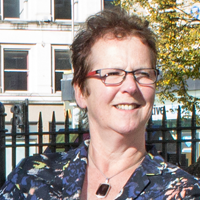 Linda Giles, originally from west Cork, shares her experience of surviving breast cancer to encourage women to be breast aware and to go to their GP if they experience any symptoms.

Linda is a single parent with a teenage son and lives in Dromore, County Down.

She began her career as a print journalist, travelling the world covering stories from the Middle East to the USA.

Linda says: “I was always very busy and enjoyed the buzz I got from my work. I spent three years in America working in journalism and even covered the Gulf War in 1991.

“I had a keen interest in sport, travel, photography and hill walking, and outwardly I was healthy and fit.”

In September 1991, Linda discovered a lump in her breast. Concerned about what this could mean, she sought the advice of medical professionals.

“I got an appointment very soon after discovering the lump and from there I was referred to the Belfast City Hospital breast clinic. After investigations, it was decided to remove it surgically.

“I was waiting to be discharged when the surgeon drew the curtains around my bed and told me that the lump was cancerous and a mastectomy was necessary. I will never forget the shock I felt at that time; I remember thinking I am only 34 and breast cancer is less common at this age, as the majority of breast cancers occur in women over the age of 50.

“I was disbelieving. I went to ring a friend and I was in such a state that I actually rang my own home number, which went to voicemail!

“I remained in hospital for a fortnight; it was tough, I was in pain physically and mentally, and I had a lot to get my head around, but I dealt with it in stages and remained positive.

“Being self-employed also meant that the economic necessity of paying a mortgage forced me to get up and go out to work. Thankfully, I also had a lot of support from family and friends.

“The surgery was followed by chemotherapy treatment which went better than I expected – even to the point of not losing my hair. I turned down reconstruction at the time as I felt it entailed more invasive surgery and it didn’t alter the reality of losing a breast, but 25 years on, I did take up that option."

She also availed of the services of a counsellor at Action Cancer who was instrumental in getting her over the fear, and helping her to handle it and get on with life.

Linda is now sharing her story to show that there is life after cancer.

My advice would be: any lumps or bumps, get them checked out straight away. Cancer is a word, not a sentence.

“Having been told that chemotherapy can affect fertility levels, I was pleasantly surprised to find myself pregnant in 2000 and now have a teenage son, Ross.

“I’ve made the most of life since my cancer experience. In 1992 I returned to education as a mature student and gained a BSSc (Sociology) and MSSc (Irish Politics) from QUB. In 2000, I trekked the Himalayas in aid of Newry Hospice and later that year I ran the London Marathon. Of course being a mum has been a fantastic experience.

“However, I am under no illusions, and cancer affects different people in different ways – it’s not all plain sailing, you may have ups and downs and having cancer can be troublesome – it can affect life and travel insurance premiums, but it is now recognised as a disability which means that people with cancer are protected from discrimination by law so it’s always worth speaking to others to get information if you are unsure.

“Putting off seeing your GP won’t change the possibility of a diagnosis – the quicker you get seen though, the better your chances are of catching it early and receiving successful treatment.

“Cancer hasn’t held me back – the surgery and treatment proved effective. I acted immediately and the cancer was caught in its early stages. My advice would be: any lumps or bumps, get them checked out straight away. Cancer is a word, not a sentence.

“Treatments are improving all the time and survival rates are better. There are tremendous support services too… remember, a feel a day keeps the doctor away!”