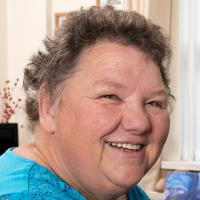 Jan Hall, living in Belfast, talks about her experience of breast cancer.

I had faced cancer twice before and it really didn’t make much difference to my life, that was until I was diagnosed with breast cancer. Breast cancer was different to the other cancers; it affected not only my health, but my physical appearance and ultimately my mental health as well.

I am 62 years old so I fall into the Northern Ireland Breast Screening Programme, which screens women aged between 50 and 70 every three years. When I was invited for screening I went along to my local unit and, having no symptoms, I wasn’t concerned. I knew attending the screening meant that I was taking control of my wellbeing and looking after myself.

At the screening I had a mammogram, which is simply a low-dose x-ray of the breast tissue. This enables the detection of breast cancers at an early stage and long before there would be any symptoms.

My advice to anyone who receives an invite for screening, whether it is breast, cervical or bowel, is to take it up.

Following the results from the screening, I was diagnosed with breast cancer.I felt like I had been given a death sentence. My diagnosis resulted in several operations and eventually the whole breast was removed.

After the operation I hated my body, but with counselling I started to get my life back together. It’s not easy but whoever said life was easy was telling a lie. I am still taking drugs but I am doing well.

I know lots of people hear the ‘C’ word and think there’s nothing beyond it, but I can honestly say that there is life after cancer. It might not be as you were before, but you can if you have the mind-set create the ‘new you’.

My advice to anyone who receives an invite for screening, whether it is breast, cervical or bowel, is to take it up – early diagnosis can be the difference between life or death. And remember, if you are diagnosed with cancer it’s not the end of the world - there are lots of support groups out there who understand and know what you are going through.

It took me a while but with help I have realised that the ‘pre cancer me’ is still here. I have learnt to make friends with the ‘new me’ and I am starting to enjoy life again.